ECMC Group has released the latest data from its multi-year Question the Quo Education Pulse study of Gen Z teens. The latest findings point to a possible “new normal” for education that requires shorter, less expensive, more direct-to-career pathways in high-demand industries. This report highlights these findings as well as the trends uncovered in five national surveys of more than 5,000 high school students ages 14-18 conducted between February 2020 and January 2022.

ECMC Group, in partnership with its affiliates ECMC Education and ECMC Foundation, launched the Question The Quo public awareness campaign in February 2020 to gather insights from Generation Z high school students about their education and careers, and to encourage them to follow the path that is right for them. ECMC Group began surveying high school students before the COVID-19 pandemic and continued collecting new data as students’ lives and education environments were impacted.

Despite having their lives continually changed, Gen Z’s confidence in themselves only dropped slightly from February 2020 to January 2022. Other areas were impacted more significantly. The number of students considering four-year college dropped 20 percentage points, and there was a nearly 10 percentage-point drop in those who believe any education beyond high school is necessary.

Despite these concerning numbers, several key tenets have continued to ring true and were echoed in the most recent data set: 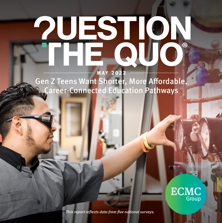