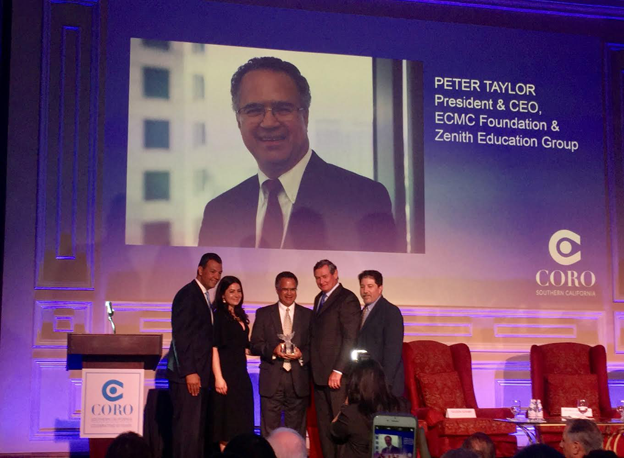 Marking Coro's 60th anniversary, the event on May 4 recognized high-impact individuals who have worked to create a significant and positive change in the region, and exemplify excellence in effective leadership and dynamic community involvement.

In addition to Taylor, other honorees of the event were Aileen Adams, former deputy mayor of Los Angeles and former secretary of state and consumer services; and George J. Mihlsten, partner at Latham & Watkins LLP.

"It is an honor to be recognized at the Coro Eagle Awards Gala. Truly, this would not have been possible without the thousands of students I have had the privilege to know and work with over the years," said Taylor. "Their dedication, hard work and commitment to their education—sometimes, in spite of the obstacles and challenges that life can bring—fuels my work each day."

Founded in 1942, Coro is a nonprofit, nonpartisan organization that trains leaders for civic life. It prepares fellows with skills necessary to lead effectively, as well as creatively and ethically deal with challenges of democratic self-governance. Taylor is a graduate of the Coro Southern California Fellowship in Public Affairs.

Prior to his current positions at the Foundation and Zenith, Taylor spent five years as the chief financial officer of the University of California, where he was responsible for $500 million of improved fiscal performance and advocated for policies that reduced the costs of providing higher education.

Active in the community, Taylor was recently appointed by Governor Jerry Brown to the Board of Trustees of the California State University system. He also serves on the boards of Edison International, Pacific Life and the J. Paul Getty Trust. Taylor previously served as president of the UCLA Alumni Association Board of Directors and as the alumni representative on the UC Board of Regents.

A tribute video was shown at the event with reflections from a number of individuals who have witnessed Taylor's leadership and civic involvement. View the video: